By Vikramdeep - May 07, 2017
As mentioned in the Schiit Magni 2 and Modi 2 unboxing article, i recently got my Schiit Stack.
Since the time i have installed the schiit stack with my laptop, i have tried this DAC & Amp combo with different Headphones, Audio file types and against other DAC &  Amp combos so that i can give a review which is not just based on technical specifications and the fandom responses to the Schiit Stack. 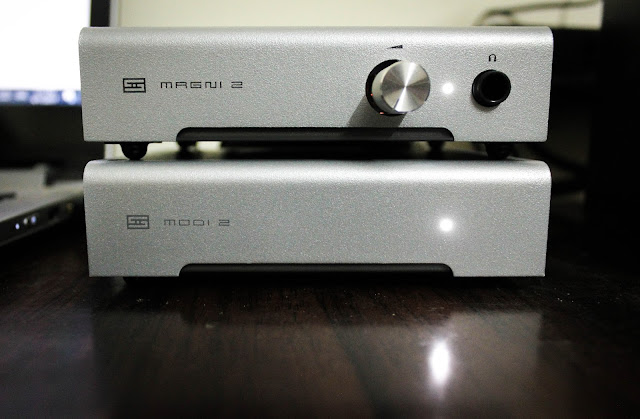 On paper, the Schiit Modi 2 and Magni 2 are very solid devices and full of power.

The Modi 2 DAC has no controls except a switch on the back. But a DAC's basic purpose is to decode the input to highest detail level and as such needs no controls. The performance of a DAC depends on the chip inside.

The build quality of Modi 2 is outstanding. Its solidly built and feels sturdy in hand.
The DAC is one of the best available in this range. It fulfills its intended purpose. The sound of Modi 2 is neutral which means it provides us with the same sound that was produced while recording the tracks. This DAC is outstanding to say the least.

Next comes the Magni 2:

The Magni 2 has two controls, one being volume knob and other being the gain switch. The build quality is same as Modi 2.

While the Modi 2 provides us with an almost exact sound of the original recording, the Magni 2 does the task of Amping that sound without adding any sound signature of its own. These is no noise in the output sound. The gain switch gives the Amp enough power to drive even my 300 ohm Sennheiser HD650s at about 30-40% volume.

Coming to the review of Schiit Stack (the Schiit Modi 2 and Magni 2 combo): 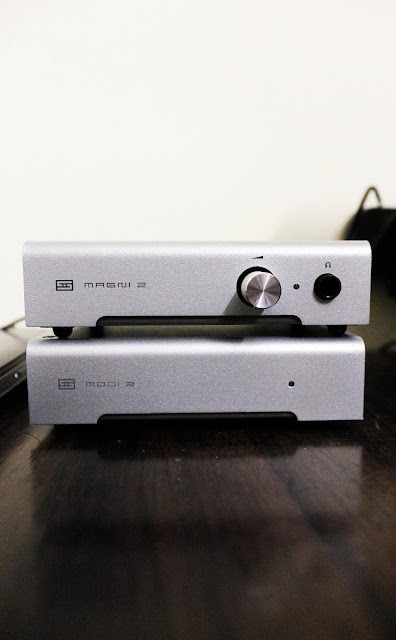 The sound from this schiit stack is outstanding. At the moment i can say that this might be the only Amp & DAC combo ill ever need.
The best thing about schiit stack is that there is no fatigue at all. I can listen to songs for hours and hours. I would like to mention here that i listen to Schiit Stack with my Sennheiser HD650s.
The Schiit Stack simply amplifies the properties of a Headphone. Like the HD650s have a more laid back relaxing sound, the schiit stack amplifies the bright sound of Hifiman HE350s (Massdrop edition) and one might need the equaliser adjustment in that case.
Before using the schiit stack, there  was no major difference between the Sennheiser HD650s and Sennheiser HD598s while using with my Asus Xonar U3. But the schiit stack has given me enough reasons to not use the HD598s as long as i am having the HD650s. The HD598s sound cheap, less refined as compared to the HD650s on the Schiit Stack. The Schiit Modi 2 and Magni 2 complement each other bringing out the best in each.
While the Schiit company has not cut corners on the performance of the Schiit Modi 2 and Magni 2, they have been able to keep the price point decent.
The biggest competitor for the Schiit Stack is the O2 Amp and ODAC combo. But considering the Schiit Stack is cheaper, there is not enough reason to  buy the O2 Amp and ODAC combo instead of the Schiit Stack.
However, i am still struggling to find a track where the FLAC sounds better than MP3 320 kbps on the Schiit Stack and HD650 combo. When is do, i'll do a separate review on FLAC vs MP3 using my Schiit Stack and difference headphones.

The Final Verdict:
The final verdict is that the Schiit Stack give full value for money. It is like a mini power hose and goes against the convention that to get better sound you need to pay more. It will bring out the best in your headphones. The Schiit Stack serves its assigned task very efficiently. As i  said above, this Schiit Stack might be the only Amp & DAC combo i'll ever need.
Thumbs up for the Schiit guys.