By Vikramdeep - February 27, 2018
And Diljit Dosanjh has dropped a new album out of nowhere after a gap of five years. There was no hype around this album, moreover, nobody knew about this album till Diljit disclosed it on his Twitter/Instagram account a few days back.
Diljit has risen to new heights of stardom in last five years featuring in Bollywood movies, judging national talent shows and winning Filmfare award for his debut in Bollywood. But does this newly found fame weigh-in for his choice of songs in his new album Con.Fi.Den.Tial or is he going to continue the raw folk style he started on his last album Back To Basics alongside Tru-Skool. Not to mention that there is no featuring of likes of Tru-Skool and Veet Baljit; instead, Diljit has opted for Snappy as the music director and Rav Hanjra as the lyricist for his latest offering giving a kind of urban vibe to his new album. The title and song listing of the album also lay the ground for an Urban/R&B/Hip-Hop offering giving a 180-degree shift from his last album. 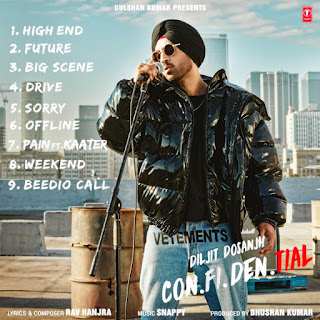 So here is the song by song review of the album Con.Fi.Den.Tial by Diljit Dosanjh:

Song #1: High End: This is the lead single for the album and was released on 21st February 2018. The lyrics include lots of English words infused to a much desi number inline with the current trend of Punjabi music industry glorifying cars, shoes, money etc. But the tune and music of the song is dope and the song grows on you in the very first hearing. Never thought some new producer like Snappy will work for Diljit Dosanjh and produce a song which will be dope in every manner. No wonder the song is trending on every chart, be it YouTube or iTunes. The music video for this song is also good.  I hope the next 8 tracks are as good as this song coz this song has grown on me in last 6 days. This song gets 5/5 stars from me.

Song #2: Future: This song starts with a tune reminiscent of r&b songs of the west. And we get another song with English words infused with Punjabi lyrics. I think Diljit was definitely trying to get an urban vibe to this album. The tune is catchy but overall the song is not as good as the previous one. It is too much a display of r&b genre vibe for a listener like me to digest from a singer like Diljit Dosanjh who has given us hardcore bhangra/folk songs in the past. The lyrics also feel poorly written using the hook line again and again. The plus point of this song is good music production laid by Snappy. I have a feeling Snappy will be featuring with big Punjabi artists after this album. Overall this song gets 3/5 stars from me. Fingers crossed for the next track.

Song #3: Big Scene: As the songs starts, I have a feeling another dope song is in here for me. This song's music has a hip-hop feel to it. Bang on tune and music. Some Porsche related lyrics are here which disturb the flow of this banger. This is a really cool song using Diljit's vocals to elevate the standard of the song. Although English has again been used in the lyrics which spoils the mood for me a bit; but the tune, music and the vocals overshadow the shortcomings of this song. Diljit's vocals have been auto-tuned on this song which was unnecessary coz his vocals are top notch. However, I love this song. This song gets 4.5/5 stars from me.

Song #4: Drive: This song has a desi feel to it and I love it. Diljit really shines here. I don't know why Snappy is using autotune on the vocals? The song has a very good flow to its tune and I can listen to this song on repeat. Simple production, lyrics, and tune make this song a must listen on this album. This song gets 5/5 stars from me.

Song #5: Sorry: This song starts with a Justin Bieber feel to it but the song changes the vibe immediately and the lyrics drop. Another desi song wrapped in a western vibe is served to us here. Man, Snappy can't get enough of autotune on this album. This is as annoying as the Delhi type Punjabi-English lyrics on each and every song on this album. This song gets 4.5/5 stars from me.

Song #6: Offline: Oh man, autotuned vocals are everywhere on this album. The thing with auto-tune is that it makes one feel that the singer does not know how to sing, and that is definitely not the issue with Diljit. The song's composition is very good. It is basically a ballad. This song gets 4/5 stars from me.

Song #7: Pain: O boy, Diljit sings in English on the intro of the song and I cant understand what he said. I am totally lost. Maybe it is due to the cheap autotune trick Snappy is pulling on every song. I believe I have found the worst song on this album. The song isn't fully crap. Everything is fine on this song but the hook line makes me cringe. I could not listen to the full track because of the hook line.This song gets 1/5 star from me. Diljit should try not to act like a dude on his tracks.

Song #8: Weekend: Another R&B song. A soberer autotune on this track though and no English lines. But i think maybe if Diljit had reduced the amount of English on tracks of this album it would have been a far better album. Barring the autotune issue, the production is good on almost every track on this album. But I must say I am missing the desi/folk/raw songs of Diljit on this album. This song gets 3/5 stars from me.

Song #9: Beedio Call: I have been waiting patiently for this one. I know this will be desi track for audiences like me from the title itself. The song starts with a flute sample and as Diljit kicks in on his vocals the song's music goes in the reminiscent dholak sample. As I judged, this is the desi track. I am satisfied at last. Diljit saved the best for the last. I will be playing this song for a long time. Autotune and English are present on this track also but I love this song. Everything has been properly balanced on this track. This song gets 5/5 stars from me. 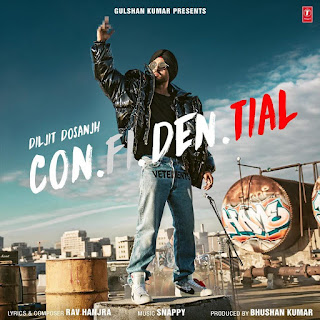 Final Verdict: This album is a bit difficult to digest for me, a guy who has been following Diljit from the start of his carrier. It has too much of an international feel to it. Maybe Diljit made this album for the very purpose of appeasing his international audiences. I have to applaud Diljit for taking a bold step by producing this album which is a total diversion from his past endeavors. For me, this album falls short of the bar set by his Back to Basics album. The album feels like it has been produced in a rush to meet a deadline or something where we get a hit on some tracks and a miss on others. But I must say, this is not a bad album. Tracks like High End, Big Scene, Drive, Sorry and Beedio Call are must listen. I think if Diljit had opted for a more experienced music director, the album might have been better. Overall the album gets 4/5 stars.
album beedio call big scene con.fi.den.tial diljit diljti dosanjh dosanjh drive future high end new album offline pain punjabi rav hanjra review snappy sorry verdict weekend